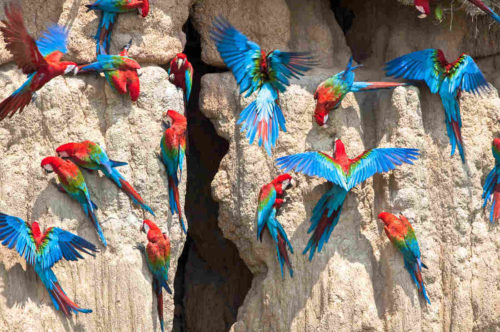 NPR journalist Carolyn Beans recently interviewed Dr. Young about a recent scientific article that documents the geophagic behavior of Amazonian parrots. The authors set out to test the two leading hypotheses about geophagy:

The authors found that for the majority of parrot species observed, clay eating peaked during breeding season and was unrelated to food availability. They interpreted this to indicate that pica among parrots serves as a means of micronutrient supplementation (nutritional demands for sodium increase among birds during breeding periods). Although the study benefits from a large sample size and long data collection period, Dr. Young warned against mistaking correlation with causation. She also argues that clay analysis is needed in order add plausibility to the authors’ conclusions– we still need to know if the clay being consumed is actually high in sodium, and if parrots preferentially choose clays that richer in sodium.

Author: Sera Young
Filed Under: News
After Nearly a Year Away, Vicky is Back – And Ready to Write Her Dissertation!
Pica Among Hispanic Women Living in the US
Tweets by ProfSeraYoung